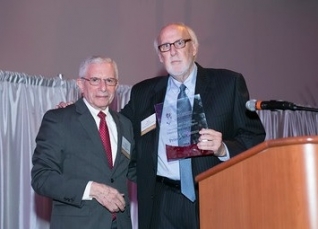 The award was presented on the eve of the Governor’s Conference on Housing and Economic Development, which takes place October 2-3 in at Harrah’s Resort in Atlantic City. The annual conference, now in its 22nd year, brings together housing industry and economic development leaders participating in six diverse tracks ranging from housing for community needs to fair housing to economic development, an Atlantic City bus tour, and is capped by a keynote address by Governor Phil Murphy.

“Peter O’Connor has a long-standing reputation as a respected social justice advocate in all aspects of housing and community needs,” said Lieutenant Governor Sheila Y. Oliver, Commissioner of the Department of Community Affairs. “His fortitude, persistence and dedication in fighting for fair housing and development designate him as a worthy first-time recipient of this honor. We proudly welcome Mr. O’Connor to the Governor’s Housing and Economic Development Hall of Fame.”

In May 1971, O’Connor and two other Legal Services attorneys, Carl S. Bisgaier and Ken Meiser, filed suit on behalf of individual plaintiffs and the NAACP to challenge suburban Mount Laurel Township’s refusal to permit affordable housing in the municipality. That case, Southern Burlington County NAACP v. Mount Laurel, was appealed to the New Jersey Supreme Court in 1975, and again in 1983, and led to the first requirement in the nation that all municipalities provide for their fair share of the region’s need for affordable housing. Today, as founder and executive director of Fair Share Housing Development, he has worked to develop affordable housing developments in suburban New Jersey. As the founder and former Executive Director of Fair Share Housing Center (FSHC), he also remains part of the team of FSHC lawyers representing the original Mount Laurel plaintiffs in litigation against Mount Laurel and Cherry Hill Townships.

“For nearly 50 years, Peter O’Connor has been a leading voice in efforts to ensure housing that is affordable and accessible to all,” said New Jersey Housing and Mortgage Finance Agency (NJHFMA) Executive Director Charles A. Richman. “He has been a leader on behalf of fair housing issues, and we are very pleased to congratulate and present him with this inaugural award.”

“I am especially honored to be the first inductee into the Housing and Economic Development Hall of Fame. I’ve worked for five decades on integrated affordable housing in the suburbs of New Jersey and have encountered every type of challenge,” said Peter J. O’Connor. “Today, I feel the most pressing issue, despite the state’s budget constraints, is for the affordable housing community to pull together to ensure the next state budget includes significant appropriation for implementation of the Mount Laurel Doctrine. Urban crime and poverty will never be effectively addressed if we continue to replace old segregated housing with new segregated housing in New Jersey’s urban centers. We need positive opportunities for families to live in safe, healthy communities near decent jobs and good schools.”

To view the press release announcing this award, click here

Home Is Where the Heart Is »

Income Limits and Rental Costs For Our Newest Rental Units